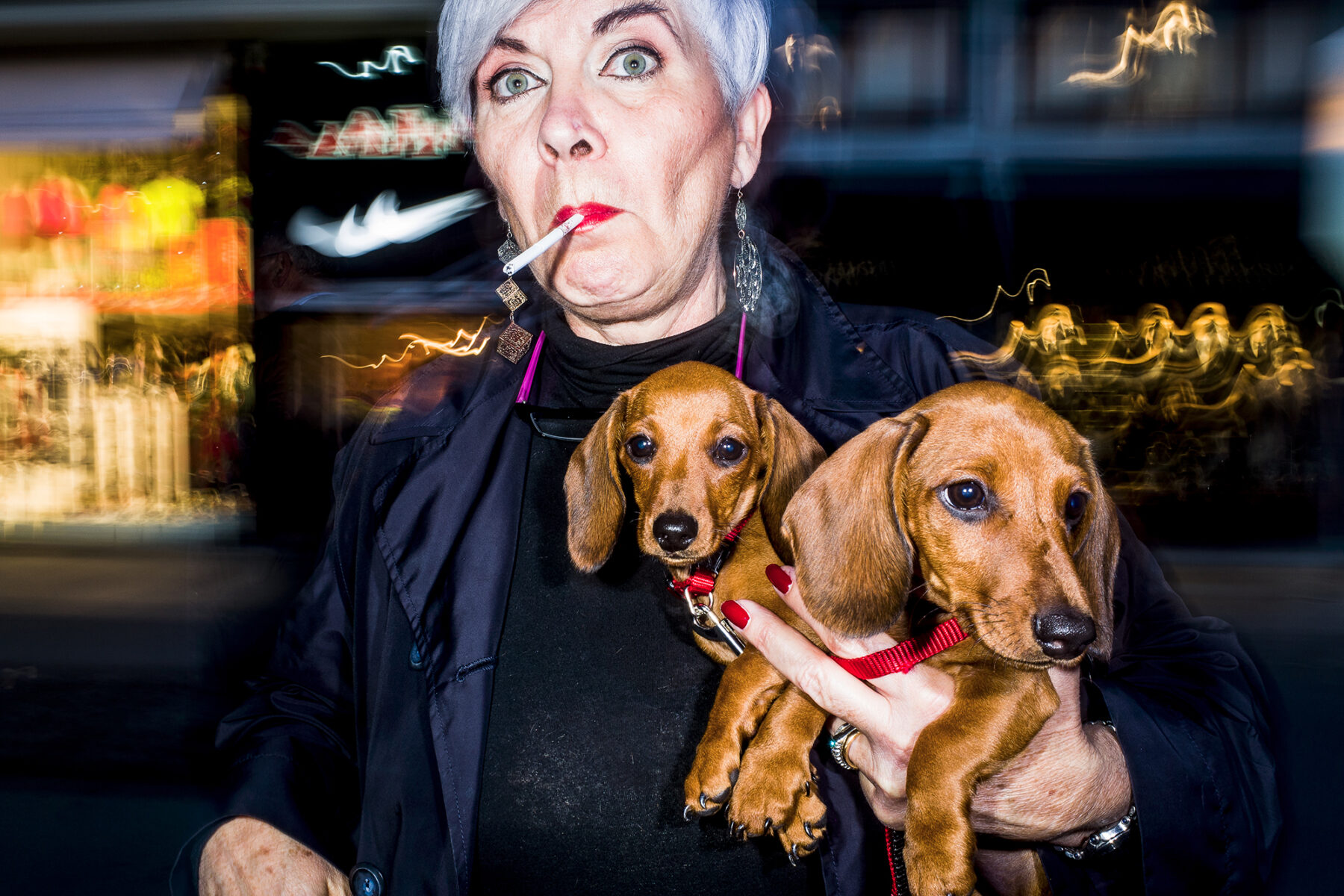 I was always surrounded by photography. My father was a scientific photographer. For him it was more technical, whereas I prefer a more personal approach.

For me photography is a filter between reality and myself, the lens acting as a decoding tool to decrypt things, to interpret them in my own language. So yes this is the only medium suitable for my subject.

I use a camera and a flash, that’s all I need.

I take my photos in the street and public places – the beach, shopping centres, bars, pubs or any places frequented by people. I always have my camera with me. I live for it. I love to capture people with their habits, virtues and vices.

I started working as a street photographer in 2013. Until then I worked only for a local newspaper and had not yet embarked upon my own work as a street photographer. I only had commissioned jobs. This made me feel very frustrated. So one day I decided to go out into the street to photograph people. I was looking for something unique about everyday life, but it wasn’t enough for me anymore, I think it was too selfish. It was no more than a game between the spectators and myself. So I started using a flash and getting much closer to people.

Yes my cultural heritage influenced my photography. I think that being an “outsider” shaped my culture. I wasn’t a good student at school. I preferred to observe the world with my eyes rather than in schoolbooks, that’s why I lived a lot on the streets of the neighbourhoods of my city. Viareggio is a little city but it’s also a city for tourists so I saw many different cultures. When I reached the legal age I bought my first motorcycle and started travelling. This certainly greatly influenced my current job.

I don’t think that there was any particular event but many events. I took my own path that shaped my way of seeing trends, stereotypes, politics and people. I was like a sponge, watching and absorbing without taking pictures for a long time. Now I try to give back a little of what I took.

I love literature and cinema, and although I’m a photographer I don’t love photography. I mean I love it as a form of expression, but I spend more time reading a good novel or watching a good film than looking at photos taken by others. Among the writers who have influenced my way of photographing are Lansdale for his caustic irony, Orwell for his diplomacy and Palahniuk for his boldness. In cinema I love Pasolini, Fellini, Maresco and Cipri, Sergio Leone, Quentin Tarantino and many others.

There aren’t any anecdotes – that is the point. The aim of my photography is to compensate for all that visual pollution that we see day and night when we turn on a television. Everything is perfect, everything is beautiful, everything is clean and everyone laughs and is happy, these are a sickly lies. Nobody shows real life. I try to. My style of taking photos very closely with a flash is a parody of reality TV shows. I often seek subjects that exaggerate reality to compensate for absences. I’m really obsessed with manias, from vice to vanity.

Yes I take current events into account but I don’t work in journalism anymore. As I said before, my work is based on contemporary situations, and I always hope that my photos don’t end up as simple observations. I want viewers to be reflected in my images, like a mirror.

I think that they are a denunciation. People are too attached to material things, often for vanity and greed. So I try to show this to people.

I don’t make them wonder. I want the opposite. I want them to see themselves for what they are, so fragile and vulnerable.

I love humans, but I think that we are like too childlike. Maybe we are growing up, but we are still too irresponsible, too many things don’t work in the world, we are responsible for this.

How would you compare your last work with the next?

I don’t feel the need to compare my old work with future work, I simply close a chapter and open a new one. I believe that my work is always entirely based on a single concept.

Social intervention I hope, although it is very difficult to be understood with today’s ‘empty’ social thinking. So I mainly photograph for myself, and it makes me feel good.

I am satisfied with my current job, but I feel that I could do more, and I will.

I am concentrating even more on the human figure, from environmental portrait I switched to formal portrait, I love people’s faces, I also love their Pirandellian masks and I always try to provoke a reaction in their faces.

I’m delighted with this interview, I would like to thank you and compliment you on your work.